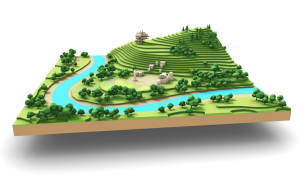 After a few days playing Godus on my iPad, I thought “Man, I wish there was a normal, not free-to-play version of this.” I also had these thoughts at various points:

Yesterday, after trying unsuccessfully to get a farmer to work on an abandoned field, I checked the web for some info and discovered…there is a normal, not free-to-play version of Godus! The PC and Mac versions are available on Steam! WTF?! 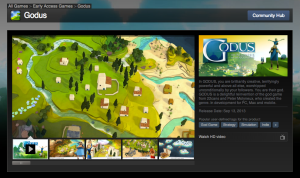 But after a quick scan of the support forums, it seems that the $20US, non-iOS version still makes you wait in real-time for things to happen. So, like the free-to-play version, your majority of your time engaging with the game is spent not engaging with it. Don’t most god games give you a way to speed up time at will?

One of my pet peeves is going to see a movie in 2D and seeing loads of shots that were clearly designed for 3D projection…and which totally fail to work in 2D. Why not create alternate versions of the shots for the majority of viewers who will see the film in 2D? It always pulls me right out of the film. I’m looking at you Oz the Great and Powerful.

It sounds like the PC/Mac version of Godus was similarly built as a free-to-play game and plays as such, even if you paid $20US for it.

I really liked Black and White. I liked Fable. Fable II was pretty fun, but disappointing. Remember what Peter Molyneux promised us the dogs in Fable II would be like?

I wanted a whole game of just that dog!

Finally, just watching Beca play Fable III made me angry. But Godus promised a return to the style of game I loved in Black and White and it looked beautiful. Yes, I would give him another chance.

And I did…for one week. I just deleted Godus from my iPad. Playing it, I constantly felt like I was fending off a particularly aggressive homeless person demanding money every time you are on your way to work (or the store, or the park…).

It’s really too bad. As mentioned (twice), the game is beautiful, sculpting the world is fun, and most disappointingly, you can see a potentially meaningful game there, just under the surface. You can see the game as it may originally have been conceived. One that asks players to ask questions about the nature of wielding godlike power. About how you treat those you are responsible for. About providing trinkets and distraction for believers to keep them loyal. About harming the neighboring tribe to make it less attractive to “your” chosen people.

I want to play that game.

FTL is a fantastic game that could easily have been wrecked by being shoehorned into a free-to-play model–not that there haven’t been moments when I’ve wished I could pay real money for some extra scrap!

While there have been a few bright spots in the free-to-play space, notably Hearthstone, which makes me very proud to work at Blizzard, it’s mostly junk that plays on the same psychological weaknesses that keep people sitting in front of slot machines for days on end. Candy Crush was fun…until it made me feel terrible.

And yes, I still want to play a version of Fable II in which the dog is the focus.

3 comments on “Thoughts on Godus”